During the week I come across different articles, stories, posts even tweets that inspire or intrigue me and they end up in a list of things for me to revisit. Usually the subject is something that I know very little about but I want to. This week was no exception. I stumbled on an article from FiveThirtyEight titled More Americans Are Dying From Suicide, Drug Use And Diarrhea and was intrigued. In the past I have looked into CDC Wonder data but this seemed to be much more of a narrative around the data that the Institute for Health Metrics and Evaluation IHME puts out and the article summarizes it saying; ‘Even as the trends differ, however, they have something in common: huge disparities by region and sometimes even within states.’

After looking into the data I thought I wanted to look for myself specifically at the infectious diseases mentioned in the article to learn more.

First off this fantastic dataset is available on the IHME data portal GHDx which stands for the Global Health Data Exchange. It is available as an Excel file that is multi-tabbed but for the purpose of this I created a tidier version of it available in my Dataset-List github repo. That way we don’t spend too much time on the tidying part.

To do this we will need a few different packages.

First is the tidyverse which helps us get the data into something we can work with. Secondly is albersusa a great package from creating great map projections. The other two are personal preferences, with the RColorBrewer providing the color palettes and my personal package awtools which is just my playground for different themes and functions that I use on this website.

If you look at the diseases dataframe in comparison to the Excel file provided we now have a row for each disease and each county. One of the first questions I was interested in answering was in what states do we see the highest changes during the time period? Luckily with the tidyverse it is only a few steps away. It is also one of my favorites:

Now that we have states separated from the Location field and summarized the Percent.Change field we can visualize which of these states saw the highest changes. 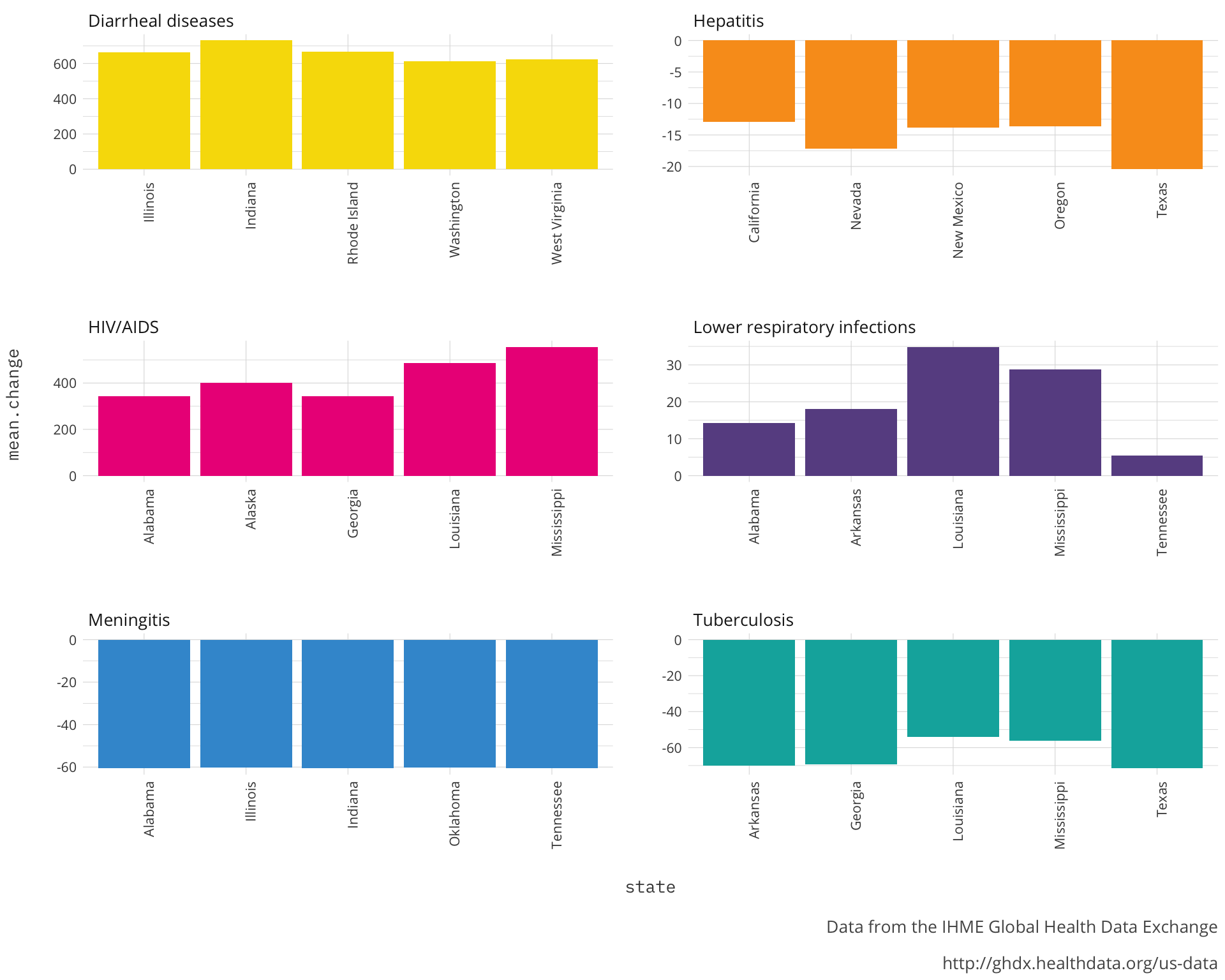 Looking at each of the diseases I can see that there is a commonality of region to most the states within each. It would be interesting to know where saw the highest changes at the county level. This should further corroborate our story that there is a strong regional aspect to the changes we are seeing in the infectious disease rates. We will look at the absolute value of percent change because there are some diseases that are showing decline. 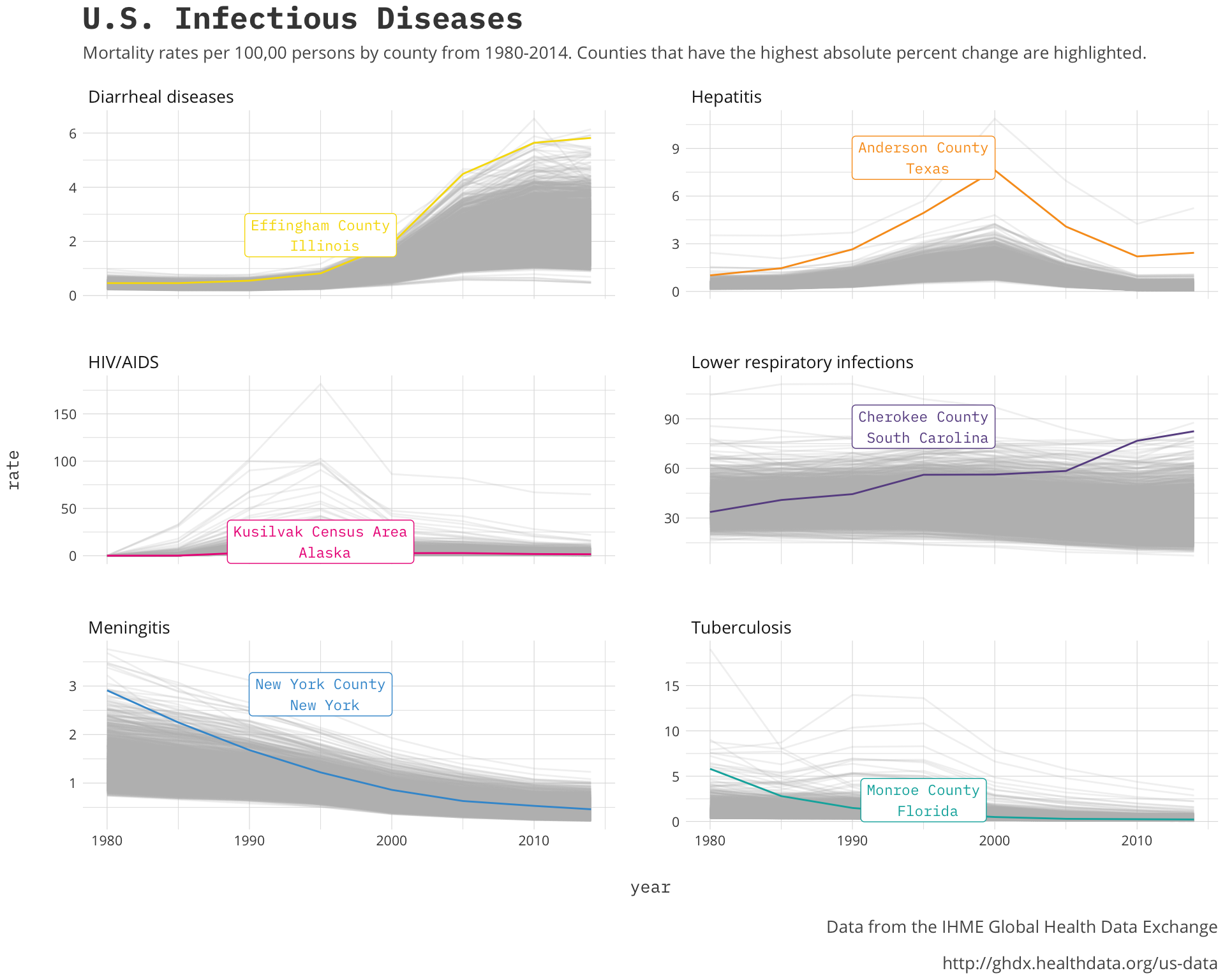 It is interesting to see the general direction of the changes by disease and the counties that are highlighted back up that regionality aspect. These counties and the other top counties should be the centers of the regions if we only had some sort of geographic visualization we could use.

Using the albersusa package we can match our data to the simple feature geometry the package provides us. I also want to create a state version of the same projection to add state outlines to our chart.

One of the interesting charts from the original article was looking specifically at the Percent.Change of lower respiratory infections. Let’s take a look at that first, we should see the area around where Louisiana and Mississippi meet as the focal point based on the states that came up in our first look. 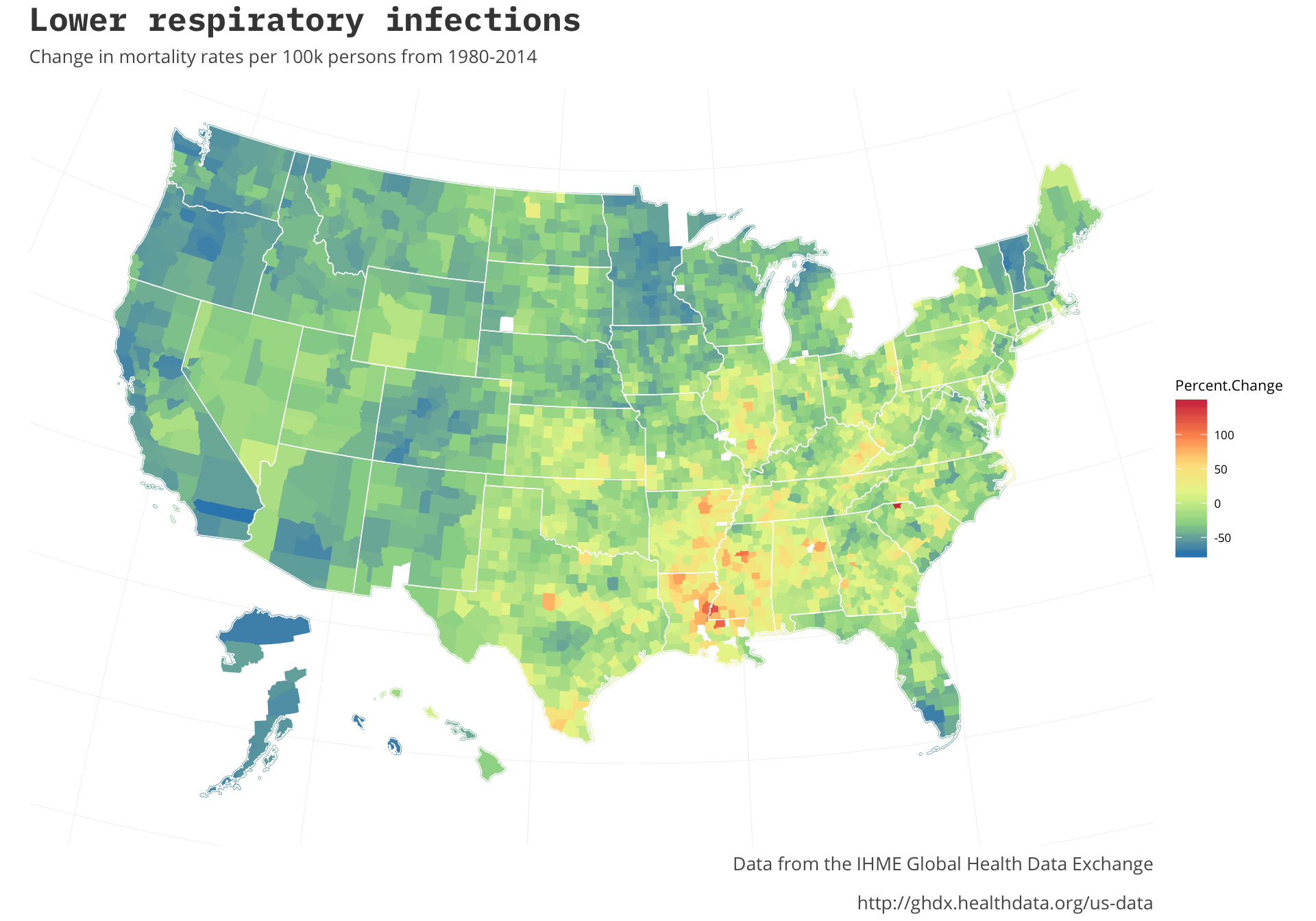 It looks like that is the case. As the original article states it looks like the disparity of regions is only growing. In some parts of the country there was a marked decrease in the rates whereas others have grown. Most of the growth seems to be focused in one area. The original post doesn’t expand on some of the other infectious diseases so it would be interesting to note if they all are centered in the same regions. Let’s look at the other infectious diseases we have data to see. 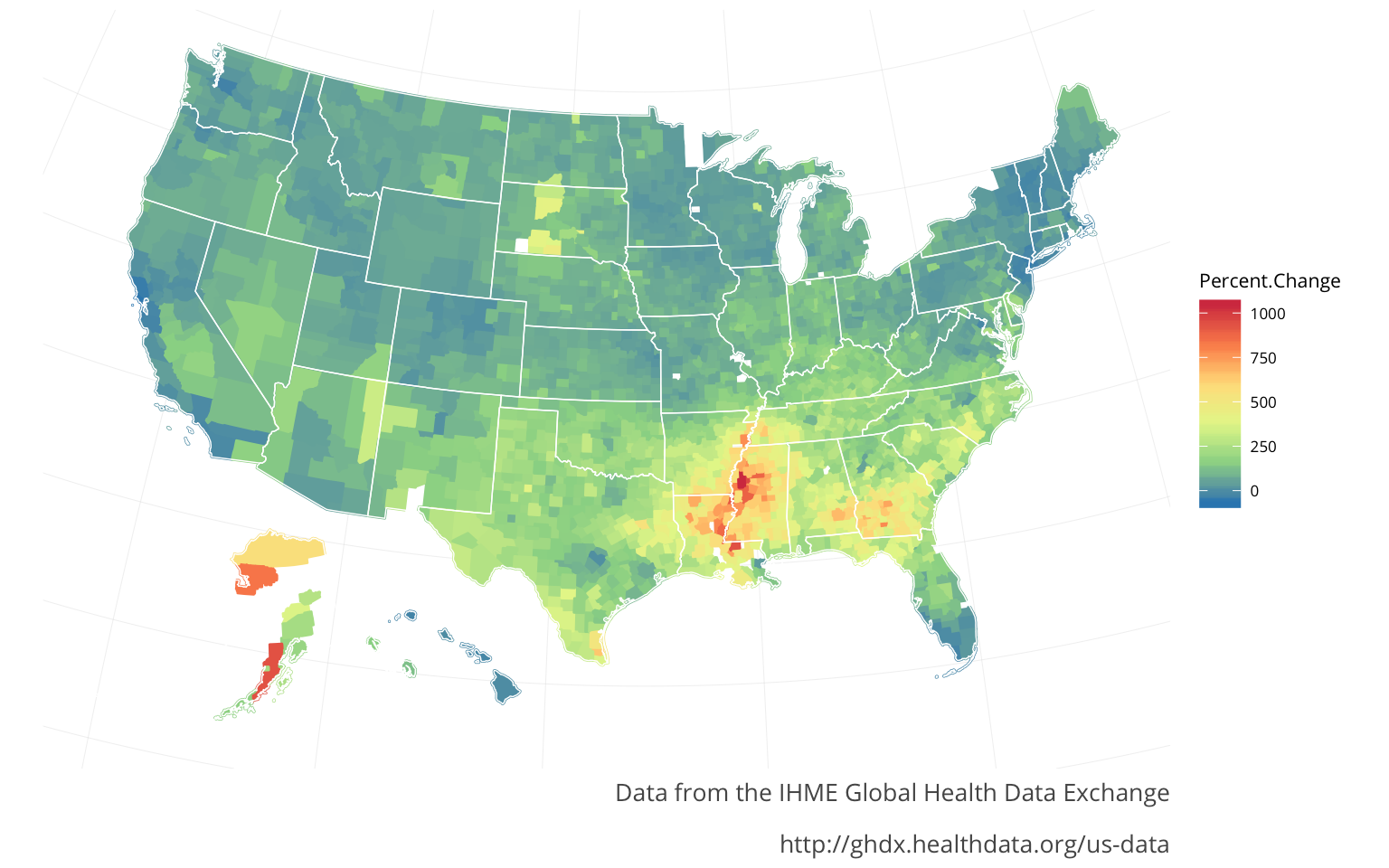 Exploring this data and creating my own visualizations has helped me gain a better understanding not only of the article I found them in but also the narrative in general. For me doing this sort of secondary look, like this one that is inspired by another article or post, really substantiates the narrative that originally interested me. This leads to me hopefully being more knowledgeable and curious about the topic in the future.