I, like many of you I am sure, spend most of my time during the day on around or in front of the screen. Every once in awhile I come across an intriguing chart, a compelling article, or some very data that I want to inspect for myself. I have done a few of these in different iterations like a couple of my recent posts, A look into U.S. infectious diseases and Friday Fun: Comparing annual ACS data with tidycensus. Though the past few weeks I have been fairly disengaged with Twitter, and the website, I came across another bit of visualization inspiration that I first saw on Alberto Cairo’s feed.

First off if you are interested in data visualization at all (which I assume you are since you somehow found this) you should give him a follow. When I saw this I remembered reading an article earlier in June that dealt with this subject. This article, Where Killings Go Unsolved and the database mentioned in the tweet provided me with a couple hours of engaged learning, reading, and consuming. The maps of different cities showing where unsolved homicides happen, the charts breaking out city by city data was to me a supreme example of data journalism and I had to take them up on the offer of the data via their Github.

The most compelling piece for me was the connected dot-plot (thanks to Andy Kirk’s Chartmaker Directory for the nomenclature) detailing the different cities and how their arrest rates compared by race. Though the originaly graphic was highly inspiring I wanted to take it and iterate on it by adding a highlight to illustrate the cities that have the worst disparities between the arrest rates.

My comments are probably not helpful to you so let me briefly explain each part before we graph.

Great. Now we can plot. 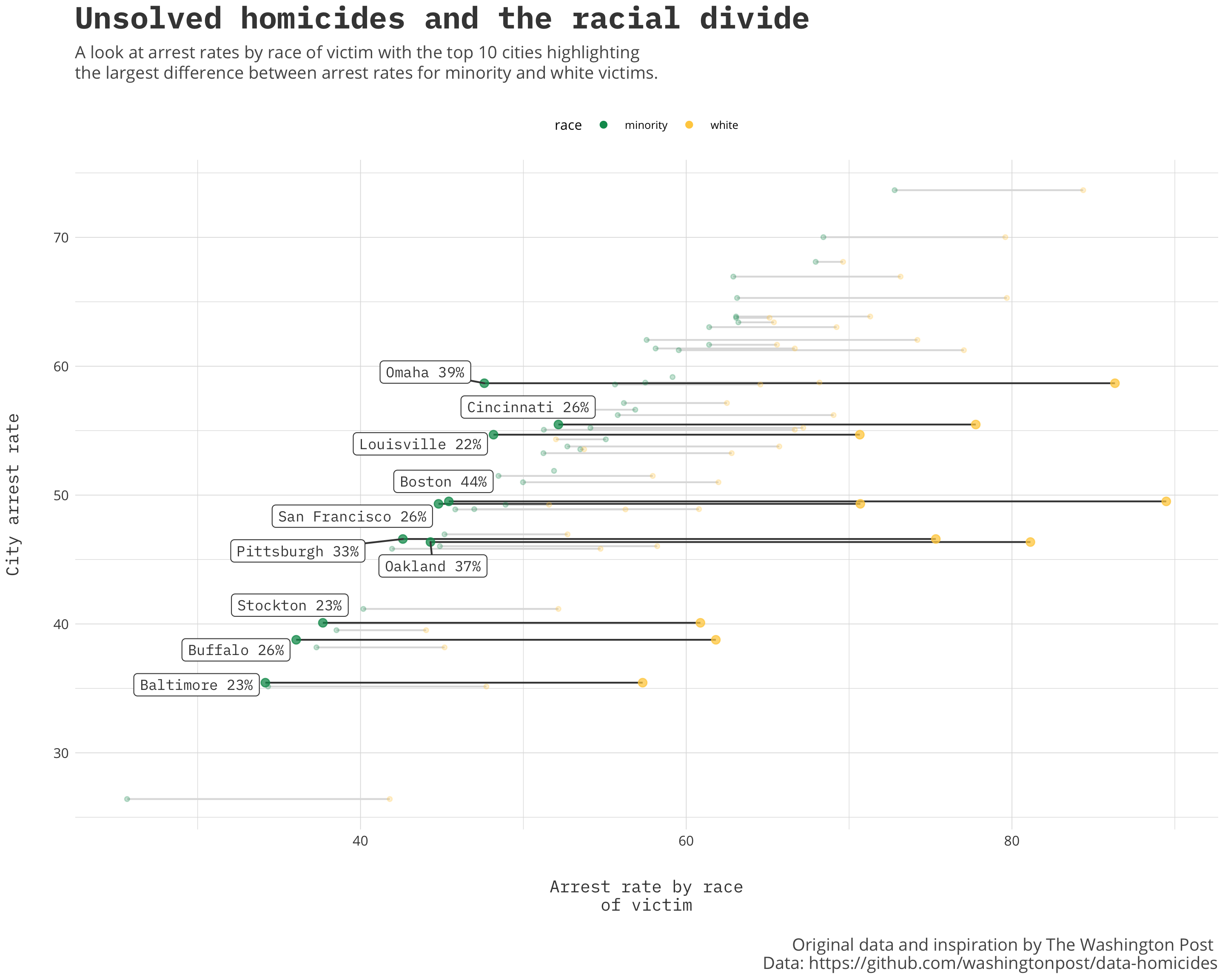 Though not an exhaustive list, the data is striking. The Post collected this data from 50 of the United State’s largest cities and though I am not an expert I think the tale could be consistent for a lot more cities not included. It is data journalism like this that makes you question, inspect, educate yourself because it puts the information into a narrative that leads you to insight. Follow organizations like the Washington Post Graphics and FiveThirtyEight on Twitter and read their articles for not only great examples of data journalism but also access to their process, line of thinking and the data so you can explore it for yourself.